Unlike most trips, this one has been uncharacteristically lazy. It’s also been a little unsatisfactory – a lesson that I shall keep in mind for future trips. I am just not the lying around type.

We got off to an inauspicious start, when a fog delay on the flight out of Melbourne meant that we missed our connection through to Proserpine. Instead we were re-routed, after a lengthy stay at Brisbane airport, through to Mackay. Unfortunately my bag wasn’t re-routed with us. Like the last time I was parted from my luggage, in Africa, I found the experience strangely liberating. There isn’t much that you really need when it comes down to it. And the less you have, the less you are weighed down.

All up it took us 12 hours after leaving Melbourne, to finally arrive in Airlie Beach. This threw our schedule off a little. Instead of just picking up the boat and taking off on Sunday, we had to shop for supplies and then wait for my bag (there were some things in it that I wanted) to arrive on the afternoon flight. So we ended up spending our first night anchored just off the marina without having gone anywhere.

Better weather would have meant a less lazy trip. The days have been mostly cloudy, with a couple of sunny afternoons early on. The lack of sun means that swimming, snorkelling and kayaking activities have had less appeal than usual. And although it hasn’t been too cold, there’s been a strong 25-30 knot wind for most of the week. Being out in the wind too long drives me nuts!

Of course though, a holiday is about getting away from the general hum drum of life, and in this regard it’s been working for me. It wasn’t until I started talking to Michelle about work last night that I realised I’d not once thought about the deadlines and stresses that usually are so much a part of my days. How’s the software development coming along? Hiring? Content preparation? Who knows or cares? I’m always amazed how easy it is to switch my mind off work, if only I just get out of town.

Instead, I’ve been sleeping, reading (onto the fourth book now), lying on deck (rugged up against the wind of course) listening to music and musing on life, all interspersed with the excitement of wildlife-spotting. It’s humpback whale season up here, and we’ve been lucky to spot a few of them spouting and breaching as we’ve cruised by. We’ve also had dolphins swim alongside us a few times, green sea turtles surface regularly beside us and we spent a fantastic half hour watching a giant (at least 2m across) manta ray lazily glide up and down next to the boat.

My best wildlife day was definitely at Hill Inlet. From the lookout I spotted what I thought was a dolphin slowly making its way along the channel toward the sea, however it was a soon apparent that he was behaving in a most un-dolphin-like manner and had a suspiciously snub nose. It was a dugong! Later, as I waded in the shallows of the inlet, watching carefully so as not to step on one of the myriad sting-rays that lie around, I found myself walking alongside pretty, sand-coloured reef sharks. Awesome! 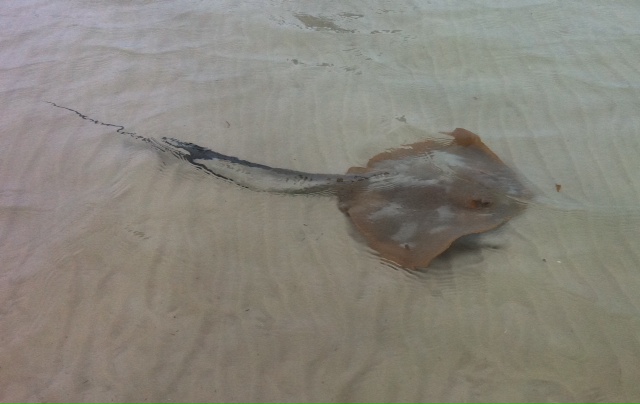 Another highlight was snorkelling and kayaking in Butterfly Bay. It was third time lucky getting to Butterfly Bay, right at the top of Hook Island. I’ve tried to come twice before – on a charter sail and also on our sea-kayaking trip – and been thwarted by weather both times. It was worth the effort though as the coral here is easily the best I’ve seen in Australia. It was here also that I spent a pleasant hour or so paddling around the rocky shores, peering into caves and exploring inlets. If I come to the Whitsundays yet again, it must be on another kayaking and camping trip.

Even without the sun, I’ve still swum at least once every day, sometimes up to four times. One of the best things about being on a yacht is the ability to get up and just jump straight into the sea. No getting dressed and heading down to the beach or the pool, just togs on and straight over the side. Of course, for me a swim is more about diving in, getting wet and splashing around, climbing out and diving straight back in again, rather than actually swimming any distance. But this morning, anchored off the divine Whitehaven Beach, I couldn’t resist the urge to swim to the shore. Not unexpectedly, it was further than it looked. But I was happy to prove that I could still manage the 300m to shore without too much effort.

Today, the last day on the yacht, is raining and cloudy and the islands look beautiful looming out of the clouds. 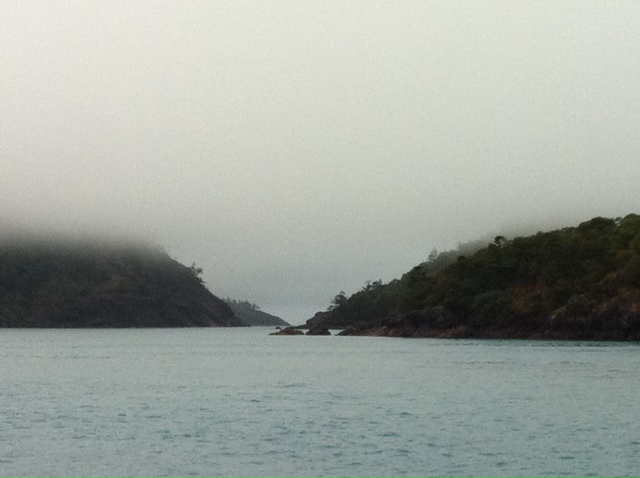 Although it might seem obvious, this is my personal blog. Everything in this blog is my own personal opinion. In no way are the views of anyone else represented here.
Loading Comments...